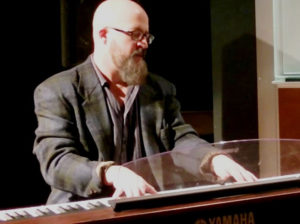 When you listen to Glenn play the piano, artists such as the pioneering George Winston and David Lanz come to mind. Glenn E. Williams plays the piano with emotion and precision that gives life to each melody and breath to the color of harmony. Glenn’s music offers up a sanctuary of sounds and styling for each ear to explore.

Glenn has always been attracted to the Classics, Romantics and Impressionists even at the young age of twelve. He bought his first LP (record/ vinyl), Tchaikovsky’s Piano Concerto No. 1 in B flat minor with Sir Clifford Curzon at the Piano.

During his study for a master’s degree in piano, Glenn began recording his original compositions. Some of these compositions range from pop songs to new age and even full-length musicals. After success of his first release in 1994 ‘Picture This’, Glenn began to focus more on piano and ensemble music.

The 1998 release of ‘Another View’ got fantastic reviews. One great review reads, “Dramatic instrumental new age/pop music – piano based, describes Glenn E. William’s independent release, “Another View”. Here you will find 14 tunes that have such a pronounced melody line that they sound as if they were songs, with lyrics, and these are the instrumental versions – and that is very good. William’s piano playing is pure adult contemporary – with tones and phrasing that range from the Love Story Theme, to Elton and Barry chordings – up to the intensity of John Tesh and Yanni – but Williams has a subtlety in his compositions that perhaps is incomparable – using quiet moody pedaling and sometimes XFiles-ish patches that add originality to his instrumental pieces as in the 7th track, “Away”. Relaxing and sometimes dark music – sometimes uplifting as in “Real”, the mp3’d entire tune here that starts with it’s soothing piano intro and moves into a lyrical upper keyboard story that becomes supported by pulsing strings before an entire keyboard orchestra joins the tasteful piano melody. Contemporary instrumental compositions for lovers of unobtrusive evenings.”(Earbuzz.com, 1998) Most of the music is based on the New Jersey coastline, from Stone Harbor to Cape May. The title came from looking at life from another view and appreciating the time we have, and the memories we collect.

Between the 1999 – 2001, Glenn began to collaborate with other artist such as jazz guitarist, Bruce Warner, singer-songwriter, guitarist Jamie Brown. The CDs titled “Breakthrough I” and “Breakthrough II” were released with Bruce and “Gallows Humor” with Jamie.

By 2003, ‘Surroundings’ was the third solo piano and ensemble release to date. This album reflects the move into a new house, a new town and a new chapter in life. The song ‘Avondale’ begins with two low bass notes which gives you a sense of “are you ready?” if so take a deep breathe. Take it all in slowly. Appreciate the new surroundings, for soon it will no longer be new. ‘Lullaby’, represents the first night in a new home and new town. You hear new sounds and they lull you to sleep.

In 2004, www.glennewilliams.com was launched into cyberspace. By doing so Glenn was able to reach more of the world. CDs began to fall in the hands of fans across the U.S. Demands for live performance grew by leaps and bounds. In 2005 to the present, Glenn began to perform at such world-renowned places as Walt Disney World, The Kimmel Center for the Performing Arts in Philadelphia, Caesar’s Palace in Atlantic City and Va La Vineyards.

There are many pianists that can be found with the help of the Internet. Each one is special to their music. Glenn E. Williams is an exceptional musician and has a passion and honesty with the music he composes and a nurturing touch to his performance. “I try to keep improving upon my skills, so that I may offer an interpretation that I find everyday that I may encounter someone, every experience I share and every dream I have.” (Glenn E. Williams).

×
Update Required To play the media you will need to either update your browser to a recent version or update your Flash plugin.